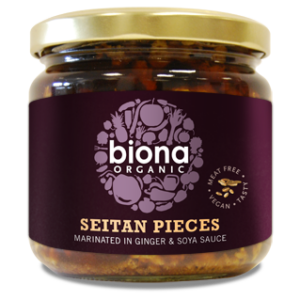 So you may have noticed that seitan is talk of the town  here at Bamboo Vegan, pretty much like on any other vegan outlet... And that's because seitan r u l e s 🙂

Truth be told, seitan is an awesome food. But since it's not easy for everyone to prepate on their own, we have ready-to-eat seitan pieces in a jar! Biona, one of the best companies in the organic/vegan market, adds yet another magnificent food to their supreme catalogue of yuminess!

You can eat those pieces of seitan on their own since they are marinated in an oriental-tasting soy sauce & ginger mix. Just combine with salad, rice, vegan yogurt cream, brown bread etc.